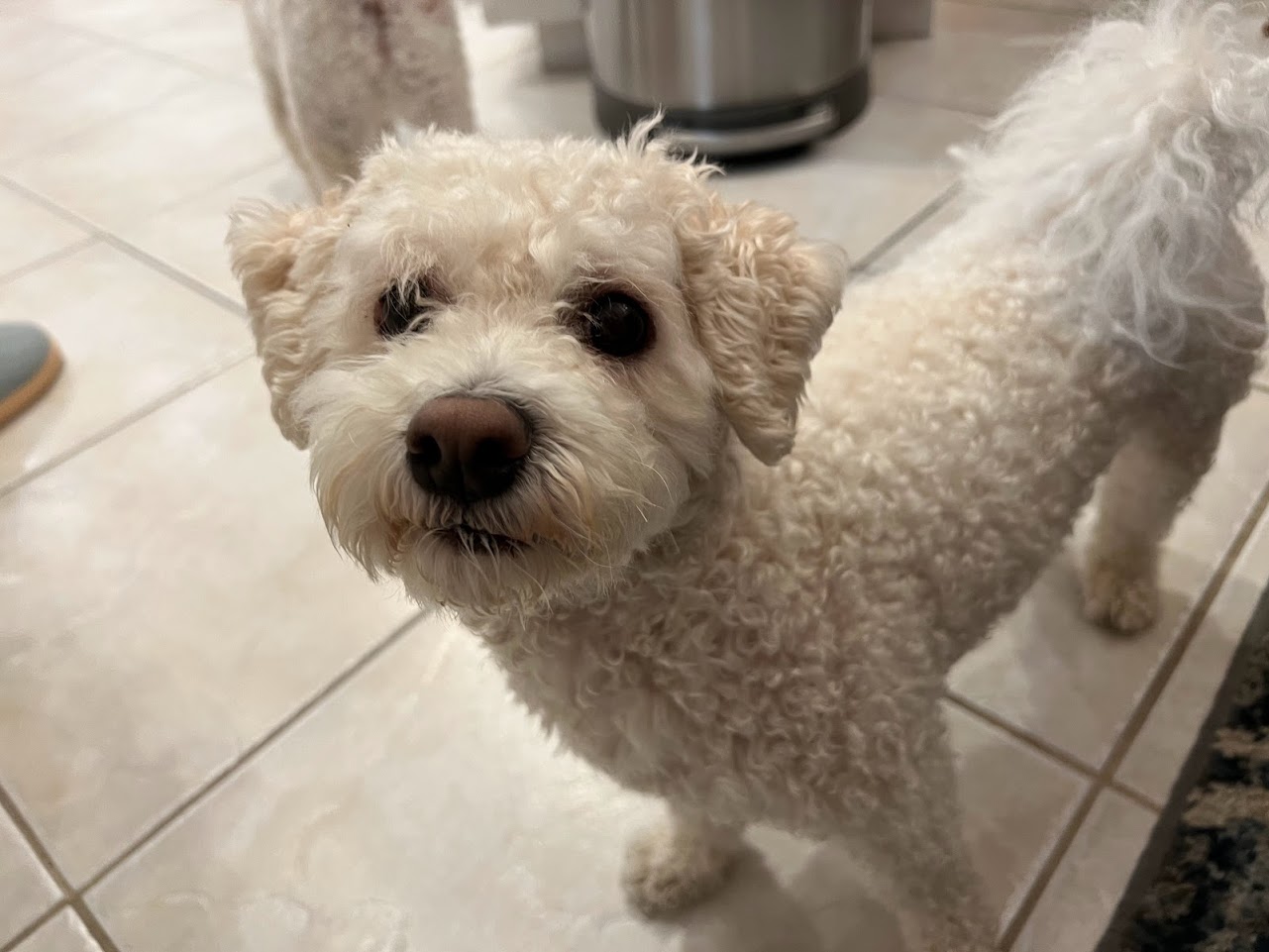 When people think of a Bichon Frise, they usually think of a white, fluffy dog. That’s accurate and reflects the breed standard for the Bichon. There can be some variation in a Bichon’s coat, though, and that raises interesting questions for owners and breeders.

Although the standard is for a Bichon Frise to have a pure white coat, a Bichon can have up to 10% cream-colored or beige fur without violating the breed standard.

Of course, these things matter only if you care about breed standards or if you plan to show your Bichon Frise. If your Bichon is a pet, their coat color probably doesn’t matter much at all.

For the standard in terms of what makes for a Bichon Frise, we can turn to the American Kennel Club (AKC), which maintains consistent breed standards for many dogs, including the Bichon Frise.

For the Bichon, the AKC says that for a Bichon’s coat, the “Color is white, may have shadings of buff, cream or apricot around the ears or on the body.” Importantly, these different colors can cover at most 10% of the Bichon’s coat.

The AKC says “Any color in excess of 10 percent of the entire coat of a mature specimen is a fault and should be penalized” in formal shows.

It’s also important to note that puppies often have more cream or beige-colored fur, and they often grow out of this and end up with a white coat once they’re fully grown. My Bichon Jack had a lot of cream color as a puppy, but now he has almost none at all.

The AKC specifically says that “color of the accepted shadings should not be faulted in puppies.”

My dog Lance has some cream-colored fur around his ears. He hasn’t grown out of it, but it certainly doesn’t bother me, since he’s a pet and not a show dog.

Do Bichons Come in Other Colors?

Most people think of Bichon Frises as white dogs, but do they come in other colors?

No, true Bichon Frises do not come in other colors. One of the hallmarks of a Bichon is their white coat. Although they may have beige or cream-colored patches, Bichons in markedly different colors likely aren’t true Bichons.

If you’re adopting a shelter pet, that can be totally fine. If you’re buying a purebred Bichon Frise from a breeder, though, they should only have a white coat, except for the small variations allowed in the breed standard. If their entire coat is gray or another color, they might not be a purebred dog.

Can I Dye My Bichon’s Coat?

Dyeing your Bichon Frise’s coat can be a fun way to celebrate a holiday, advocate for a cause, or just have some fun. I’ve seen Bichons dyed pink for breast cancer awareness, and there are Internet communities that selectively dye Bichons’ coats to make them look like pandas.

Because Bichons have a pure white coat, they make the perfect “blank canvas” for fur dyeing.

If you want to dye your Bichon’s fur, make sure to choose a safe and non-toxic dye. The company Jim & Gloria makes dye markers that many owners like. These are temporary, although some people use permanent dyes on their Bichons’ coats.

Keep these things in mind if you’re planning to dye your Bichon’s fur:

Lots of people love to dye their Bichon’s coat for Halloween, Saint Patrick’s day, or other holidays. If you don’t feel up to completing the task yourself, don’t go it alone. Instead, ask your professional groomer to dye your Bichon’s coat for you.

A Bichon Frise that follows the breed standard will always have a pure white coat, although up to 10% cream or beige coloring is allowed. Many owners like to experiment with fun colors for their Bichon Frise by dyeing their Bichon’s coat for holidays or special events.

How Long do Bichon Frises Live?